Do you know how to create the Great Elixir Of Power? You must combine the Elixir of Strength with the Elixir of Secret Sight. But to create those you will need rare ingredients: snake eye, blood stone and a massive amount of astral energy. The search for elements and the creation of elixirs can be a fun process. It's the favorite pass time of students from the College of Magic who specialize in Potion-making. By using your own recipes and potions created by other students you can not only create elixirs for every day use but also summon magical creatures and, If you're lucky, create the Ultimate Talisman of Magic. The more complex the recipe - the higher the score. Only one student, the best of the best, he who has shown exceptional knowledge in creating magic potions will be enlisted in the Guild of Alchemists.

The cards used in " Potion-Making " are both recipes and core elements. Each turn a player must play a card. If he doesn't have the right ingredients for a recipe he must play the card to the center of the table the so called "Table of elements". From that moment on it one of the core elements and is available for usage in recipes. Once a set of elements are collected in the "table of elements" a player may create some sort of potion by using a recipe from his hand. For each new potion or the discovery of a new recipe a player gains points. The player who received the most points throughout the game is the winner. 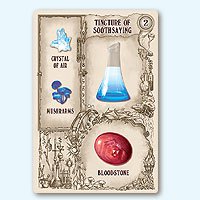 Only basic potions and elixirs can be made through the use of core elements. But they in turn can be used to create more powerful Great elixirs, talismans and creatures. The harder the recipe the more points are awarded. To create more complex recipes you can use not only your own potions but also potions brewed by other players. Though they receive points with the later.

There are also special cards in the game called - spells. With them you can transform and destroy potions to create new ones, ones that you may require for a devilish scheme to overthrow your opponents.

The game has 2 expansions - " University Course " and " Guild of Alchemists " that make the game even more fun. The expansions are separate decks of cards that are to be used with the core deck. You may play with one or both expansion decks at the same time.

There is a tournament system developed for " Potion-Making ". A rating is kept. Tournaments are held at roleplay conventions, the tournament of champions is held each year at "Zilantcon" - the biggest Russian convention. 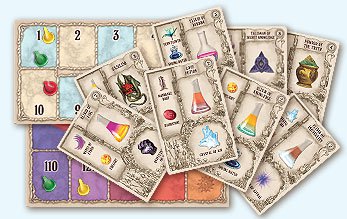 «University course» is an expansion for "Potion-making. Practice" boardgame. There are more spells, more elements and artifacts and therefore more opportunities in the expansion, and some new rules.

NOTE that you need ""Potion-making. Practice" basic set to play this game.

So the University course of magic and sorcery waits for students who know already how to mix simple elixirs and to make magic powders and who are not afraid of mysterious spells and creatures. Of course students of the University are not green beginners from primary school!

Besides the great number of new cards you'll see some changes in the rules here. Now you'll play 2 decks simultaneously ("Practice" + "University course") but you shouldn't mix them together. Each your turn now consists of 3 phases when you can take cards from any deck and play them. For example you can draw 2 cards and make a potion. Or you can put a card to the table as an element and use this element for a new potion at once (yes, we missed this ability while playing the basic "Practice"!) Thanks to the new rules it's possible to make different sophisticated combinations.

There is a new element "Elementary granum" in the expansion. It may be used as any element when creating a formula and then can replace any other element. And you have "Elixir of Omnitude" in the University deck that can replace any simple (two-component) elixir. But if someone takes your completed formula made with this Elixir or with Elementary granum in order to make his own new formula you won't get half the points - yes, we should pay for everything.

More news: four Lesser Talismans that give their players certain bonuses. E.g. Lesser Talisman of Usefulness gives you 1 point for any card you play as an element even if the desk already holds that element.

Then you'll see a special artifact named "Scruple of Conscience". It gives you a wonderful opportunity to keep your opponents down: just pass this card to any player who currently has more points than you! Now he has to add it to his hand and to lose 5 points. But be careful! This card can return to you like a boomerang.

New spells included in "University course" are very useful and helpful - of course if you put them to their proper use. So Haste Spell allows you to play two cards in a row. Or let's play Magic Vortex: ALL ingredient cards of ALL completed formulas are placed to the desk of elements. Bingo! - now we have a really great choice of elements!

In conclusion we'd like to say that "University course" is designed for those players who consider "Potion-making. Practice" to be plain and simple. If you played the basic set before we recommend you to try the expansion and hope you will like the game. It is good both for quite evenings in a family setting and for funny parties!

With this expansion you not only make potions and get points but you strain after a great goal: you have to create the Philosopher's Stone. NOTE that you need "Potion-making. Practice" basic set to play this game. So imagine that you are in a medieval alchemical lab. Use various magical ingredients to make potions and talismans and even fantastic creatures. Every player tries to get his own Philosopher's Stone. How can you do it? There are three different cards of Magnum Opus and each leads to the Stone. In the beginning of the game you get one of these cards and try to follow the succession of formulas shown on the card. When someone creates the Philosopher's Stone the game ends and that lucky potion-maker gets additional points. Just like in the 1st expansion "University course" there are many new formulas and spells and some new rules. So you play 2 decks simultaneously ("Practice" + "Guild of Alchemists") but you shouldn't mix them together. Each your turn now consists of 3 phases when you can draw cards from any deck and play them as elements or formulas. It gives you new opportunities to think over your strategy and to invent ingenious combinations. There is a new element "Elementary granum" in the expansion. It may be used as any element when creating a formula and then can replace any other element. And you have "Elixir of Omnitude" that can replace any simple (two-component) elixir. But if someone takes your completed formula made with this Elixir or with Elementary granum in order to make his own new formula you won't get half the points - yes, we should pay for everything. Of course the game with the expansion is not as simple as "Potion-making. Practice" but if you've already played the basic set you will learn new rules easily. We can recommend "Guild of Alchemists" for 3-4 players (you get a not very long, dynamic game) and unlike many other games the "Guild" is very good for 2 players too. And one more thing: you can certainly play "Potion-making" using both expansion at the same time: "University course" and "Guild of Alchemists" this way the game will be played using all 3 decks.