The Enigma of Leonardo Board Game Three seekers are bent over the table. Before them lye sketches and drawings of the Great Da Vinci. The seekers are trying to figure out the secrets behind them. They realize that the secret is hidden in the correct placement of the drawings. One of the seekers moves a sketch with a flower and the symbols suddenly form a pattern. It's obvious this is the key! His eyes shine with a victorious light. He moves the image again - the others will never know what he has discovered. He on the other hand memorized the key, but is just one of seven needed to solve the mystery. He will be the one to obtain all seven and solve The Enigma of Leonardo.

Each player receives ten cards at the beginning of the game five of which he needs to place in the form of a cross in front of him. All cards are placed face down on the table. After all cards are placed, players open them up simultaneously. Each card has a key symbol in its upper left hand corner. These are two images that are repeated on a few cards. If the symbol on 3 of the cards horizontally or vertically matches up, that player receives a key card with that symbol. The first player to collect all keys is the winner. 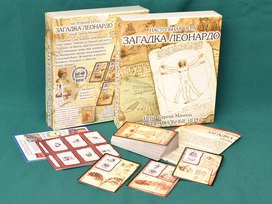 The player can change the cards in his cross by playing leftover cards from his hand and also those he gets throughout the game. You can change any card in the cross, by changing your card, the card that was replaced replaces the same card of your opponent to the left (for example it could be the top card, the left card or the center card). This way a player can not only change the cards in his cross but also that of his opponent. Only one card can be replaced each turn. If by replacing a card a player forms three equal symbols in his cross (horizontally or vertically) he receives a Key. One may also receive a Key by having 5 equal symbols on all the cards in the cross.

Please note that all images in the game are copies of Leonardo Da Vinci's works. They have been specially selected to represent Key symbols on cards.