All goblins are equal, the goblin by the Cauldron is yet great.

In the far, far away Sublunary World full of bubbling ether and artful intrigues, a country of cheerful and cunning goblins lies. She is stretched between the Mystic Ocean and black lands of the Hell's Jurisdiction, between the blessed Country of Fairies and the Map's Edge -- and combines a bit of everything: fairy's lightness of mind, devilish desires, affinity for magic and longing for reckless freedom.

Purple-skinned inhabitants of Gobland settled down wherever their short but nimble legs carried them. However, the heart of the nation beats in the capital of Big Gobba. It's here, on the Hill slopes, where the local chiefs dwelled. Upon discovering on the morrow of the recent festival that city's elite'd got lost somewhere, common goblins gave all other stuff up -- it's high time to climb up the very top of the Hill, to the Cauldron, strike it and seize a better office.

Who doesn't want to become the Great Chief and rule the biggest Gobba in the world?! I'm asking you -- who? According to the classification, Gobba is a kind of "resource gathering and winning on points" game. Goblin players travel around the levels of the Hill and do their best to collect the required quantity of resources in order to win election for one of five offices. 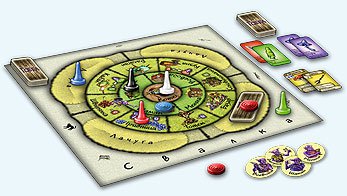 Under the Hill a large Dump spreads out -- upon getting here, players draw a card from the catch deck. They might get either a gizmo of some value and with some ability or a cataclysm impacting the overall situation in Big Gobba. As goblins are sly by nature, they can even hide a cataclysm that is unfavourable for them. However, when revealed, the deceit will be punished for sure.

The level above the Dump is occupied by Hovels. It's the place where goblins make hidings of their cards, so that their hand can be unloaded. However, it's a risky business, as there might come some enthusiasts for exploring others' hidings.

Yet higher the craftsmen level lies. Each cell up there has its own ability. For instance, in Hurler you can pay for flying to any other cell, in Booth you can play a shell game with another goblin, in Bazaar you can buy or sell a gizmo, and so on.

Above the craftsmen level, the elected elite of Big Gobba dwells. At first the area is empty, still whenever some goblin becomes elected -- other players will have to pay for passage through the occupied dwelling.

The Cauldron is situated on the very top of the Hill. To announce an election, you have to climb up there and strike it. Whoever makes a higher bid, wins. Unless, to speak the truth, some evil-minded goblin throws a Sour Watermelon and scuttles the election. I bet they can. 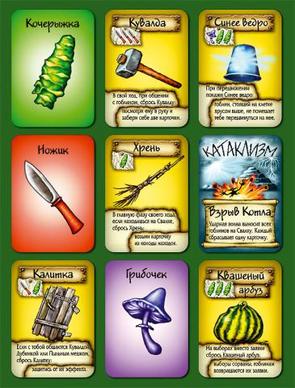 Still, even if you succeeded in getting some office, it's too early to relax. The point is nobody in Big Gobba has ever abolished reelections. They do cost more but cunning competitors can hardly be frightened by a high price.

The victor is the goblin who gets more offices, and if there is an equal number -- the goblin with senior offices. For instance, Trader stands higher than the Deputy of Hovels as the elections of the first one are paid with expensive gizmos, and for the Deputy whatever resources go.

During the game goblins can surprise each other in many ways: push down, stab with a knife, befuddle with mushrooms as well as use various sophisticated gizmos like Dusty Sack or Primus Stove.

Goblin-like elections may lead to a triumph or a scuffle but they will never make you weary!