The Hat Board Game The Hat is a game for a big friendly company where everyone can play. Players take turn in trying to explain, show or draw a word or phrase while the others try to guess what it is. The one who guessed correctly and the player showing receive points. Sometimes you need to explain more than one word while time is short. Also, to receive more points, a player may decide to make it harder for himself, for example, by setting a lower time limit. New words are taken from The Hat.

There are tons of choices. The players themselves decide what to fill the Hat with changing difficulties, themes and languages. There can always be new, unknown to the player, words. You can even make up your own words for the game. "The Hat", a party parlore-game takes it's name from a popular and similar Russian game. In it players wrote words on pieces of paper and put them in hat while others tried to explain them.

The game mechanics are based on popular Russian games such as "Crocodile", "Association", "Pantomime" and "Stooping dog".

The base for "The Hat" are cards, that show how the word must be explained: by speech, by showing or by drawing. Players take turns at taking cards from the deck and decide how they will explain their word. Words that were successfully guessed bring points shown on the card. Also there is a time limit on the cards, the word must be guessed before time runs out. 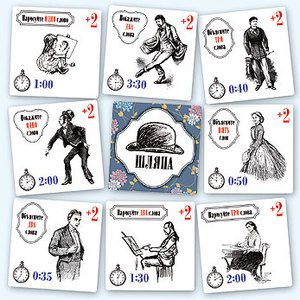 A player may choose to lower the time limit to get more points. A throw of the die will show how much the time limit is lowered. There are also three decks of cards with extra conditions, one for each type of explanation. By taking a card from these decks you make it harder for yourself but receive more points if successful. For example, if you receive the card "draw one word", you can also take an increased difficulty card that can say something like "draw with your left hand".

The main feature of "The Hat" is an unlimited access to words. It only depends from you what words will be in the Hat, what your friends will be guessing. There are tons of possibilities, the Russian dictionary counts over 140000 words alone, and you can implement foreign words to. The core set contains a starter set of words. You can start playing straight after opening the box. All you need are scissors and a hat. 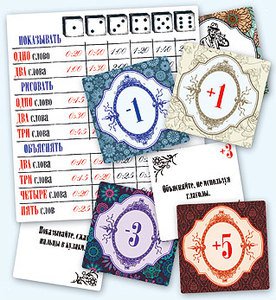 As most word games go, it gets boring to guess the same words over and over. "The Hat" took care of that problem. The core set is only to get you started. You can get new words from our website, write new words yourself or you can buy special booster packs.

Booster packs for "The Hat" contain words with different themes (history, fantasy, biology, celebrities, etc.) and difficulties and also foreign words. Each pack has a serial number which states the theme, level of difficulty and language. This way you can always have fresh words for the game.

You can also use your own words, just write them down on a piece of paper and put them in the Hat. A set of empty cards is included in the game.

Sheets with words for the game can also be downloaded from our website. Just print them out and cut them up. Words on the website are not contained in the booster packs.