The Kingdoms of Crusaders Board Game Knights of Europe are heading for Jerusalem to take back the Holy Land. After many grueling battles and countless sieges Palestine is captured, with Jerusalem taken by Godfrey of Bouillon. The crusaders build their castles on the Holy Land and create new states. But victory didn't bring an end to the war. With the Muslims pushed back, inner conflict arises. Who will be the one to rule the new kingdom of Christianity?

Players battle for control over 5 locations: The Kingdom of Jerusalem, the County of Edessa, the Principality of Antioch, the Country of Tripoli and Cyprus. The one who controls most of the locations is the winner. Players must muster a strong army in each location to win. The strength of the army depends on the detachments it consists of. Each card in the game is one detachment. The coat of arms in the upper part of the card show who the detachment consists of. It could be: pike men, archers, swordsmen, mounted knights and also heroes and preachers. Figuratively speaking the more units you have on a location the better. 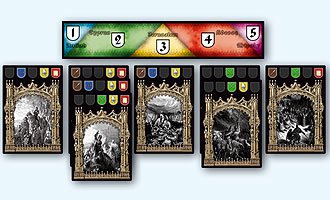 Each turn a player may play only one card by placing it to a location. Each location can hold only 4 cards which means each player will have 20 turns for the game. The secret to winning is to effectively separate your forces. You may discard one location from the start and build up a strong force in others, you may "bluff" by playing a strong card to a location so others will forfeit from that location.

The core set is for 2 players. But by combining two core sets you may play up to 5 people. When playing with three or more people there may be a situation when two players control one location in the end: if this is the case the player who captured that location first gets priority. For this the game has special victory counters. Also players may decide to play for points, the winner will be the one with the strongest army I all locations.

The graphic design of the game brings it a very unique look. The cards consist of fragments of engravings by Gustav Dore - a well know French artist who lived in the middle of the 19th century. Most of these works were specially done for a book called Histoire des Croisades (The History of Crusades) by Joseph François Michaud.

"The Kingdoms of Crusaders" a strategy to win 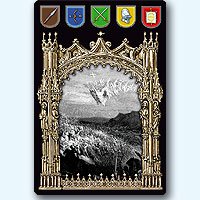 After having read the rules to the game, you may think that if you get good cards, you win. That is not the case. An experienced player can keep his losses to a minimum if not completely turn the table even without cards that have 4-5 icons.

There are a few things a newbie should learn. Be the last to show what you intend to do, this is the main rule. Even though you can't skip turns there are a lot of ways to stall. It's a bit hard at the beginning but everything is decided at the middle of the game.