"Throughout the entire war I participated in many large scale operations but the upcoming battle for Berlin was special, it couldn't be compared to anything before it. The front-line had to get through the highly defended echelon zone starting from Oder and ending with the highly fortified Berlin."

So writes the Marshal of the Soviet Union Georgy Zhukov about the assault on Berlin . For four years the Great Patriotic War continued. Millions of soldiers, thousands of tanks and planes - the entire might of USSR , Great Britain , France and many other countries were sent to battle. In the end fascist Germany was defeated.

The strategic card game "Victory Day" is dedicated to the last period of the war when soviet soldiers assaulted Berlin and completely broke the German forces. Each player takes on the role of a division commander. He has command over different units: infantry, armored vehicles, artillery and aviation.

Each unit has a historic counterpart - so for instance each rifle company in the game is a counterpart of real life divisions, platoons of KV tanks and T-34s, batteries of "Katusha" rocket launchers, squadrons of LA-7s and Tu-2 and so on. All in game characteristics were done keeping in mind the actual abilities of the historic counterparts. By using special "tactical cards" you can use different assaults, tactical manoeuvres and psychological effects. Throughout the game, players simulate different actions of their divisions: charges and break through, artillery support and aerial bombings, organization off defenses and blocking enemy troops. 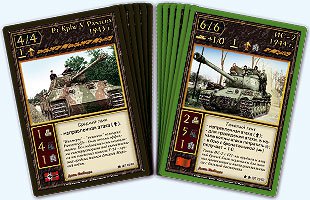 All units in the game and all game events are shown as cards. Each card has an image of the unit, it's characteristics and abilities and also a text - usually it's a quotation from a historical novel or memoires, or some information on the current unit. All illustrations on the cards are done from actual black and white photos done during the war by using computer technologies.

Booster packs containing new cards have been released for "Victory Day". Players can add any of these cards to their decks by purchasing the booster packs sold separately. This way, players can make their own unique decks by adding new cards to it. Depending on the cards in the deck victory may be easier than before. It's more important to have a balanced deck fit for different situations then just by adding strong cards. But both players need to have an equal amount of cards in their decks. It is also not recommended to have more than 60 cards in the deck.