Evolution - The Origin of Species Board Game The First Creature appeared on land. The Second followed. The First ate grass, The Second became a predator. The First camouflaged itself, The Second developed keen eyesight. The First escaped by water - The Predator learned to swim. The First hid in a burrow, the Second had to eat roots. More and more animals appeared on Earth and food was becoming in short supply... The eternal struggle between predator and prey for survival - survival of the fittest - this is "Evolution".

"Evolution" the game is based on the theory of Charles Darwin but in this game you take on the role of Creator: create your own creature, make it evolve, to hunt, to survive... Our game and this isn't a joke, can be used as a biology lesson for schools, though adults enjoy it as well. This game will appeal to both people who enjoy casual board games (30 min to learn the rules is more than enough) and to hardcore players who plan complex strategies to win.

"Evolution offers players to create their own species of animals with their own abilities all the while fighting to control the one important resource - food. By regulating the population of your creatures, obtaining new useful abilities and fighting off opponents, you must survive till the end of the game and stand at the head of the food chain.

At the beginning all players receive 6 cards; with them you can either create a creature or place an ability on an already created one: for example make it Huge or Poisonous. The game is turn-based and each turn is divided into separate phases: 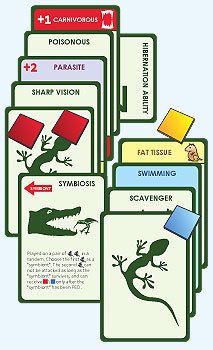 First players create creatures and apply abilities to them. Then with the help of a dice the amount of food is decided. Players turn-by-turn take food (counters) from the pile to feed their creatures: some need only one, while others, depending on their abilities may require two, three or even more to satisfy their hunger; Animals that are left to starve become extinct, but the ones that survived grant their player more cards to create new creatures and new abilities. Once the deck is empty everyone counts their points. Points are awarded for each creature that survived and for each ability on them. The winner is the one who creates the most balanced ecosystem. "Evolution" is great family game, a game for parties and a fun way of learning the basic concepts of the evolution of life and all living organisms on Earth.

Evolution never stands still. In the core game you created poisonous carnivores, hid them in burrows, made complex cooperation chains between creatures. Your animals gained fat, fell into hibernation and could cast away their tail. The expansion opens new horizons before you. Now you can teach your creatures to hide in durable shells, spit ink at opponents and even fly. Now you'll have to think twice before attacking a helpless animal! For all you know it could be a dangerous predator trying to catch you unaware.

If the core set allowed you to create animals with around 50 thousand combinations of abilities, now the possible amount exceeds 50 million, that's more creatures than that ever lived on Earth.

The expansion consists of 42 cards, a dice and food counters.

Up to six people can now play "Evolution" with this add-on.