The Great Hoodoo Board Game Following the will of its caster a spewing Fireball hurled towards me. A wave of the hand and a stone wall rose to block it. The Fireball collided with the wall exploding into sparks. The stones became red from the heat but stood strong. The mage however wasn't about to give up, Ice Arrows were already flying towards me. Another heartbeat and they would have reached their mark but a Great Tornado broke and hurled the arrows away. A pity I had to use that spell. I would have needed it to perform The Great Hoodoo... but it was effective none the less. But by casting that spell I had raised the level magic to new heights. The two other mages who were observing the battle before now chose to intervene. The Winds of Death started to blow, behind me a purple mist appeared, The Gates of The Abyss were opening. I was prepared for this. My Flame Wall closed the gate and a Magical Vortex dissipated the Wind till it was completely gone. My opponents were running out of power. Lightning flashed. The elements combined and erupted with energy - The Great Hoodoo fell upon my stricken enemies. The last of the three and the mightiest - the battle was mine. 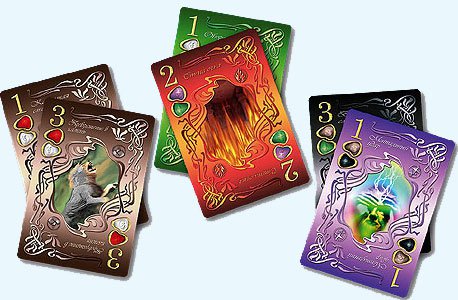 We have three cards of different value: " 1" , " 2" and " 3" . "Three" is obviously the biggest and "beats" the other cards, "two" can only beat a "one". Seems simple so far. Know it gets a bit harder: cards come in seven colors or "suits". Each color represents a different school of Magic , and each card represents a spell. Players battle by casting spells on their opponents while countering spells cast at them. You can counter by using a card with a higher value from the same school of Magic as the cast spell or by using an opposite School, a "trump". It's important to say that each color is a "trump" for two other colors. So you don't get confused the colors it can trump are printed on the card as symbols.

If the player successfully counters all spells sent at him he may have a go himself. All played cards are discarded. If not the player puts all the cards in his hand and skips his turn. The game is played till all players but one has discarded all their cards. The loser is proclaimed The NotSoBright Wizard Adept.

There is also a way to prevent yourself from obtaining the honorary title even by having cards left on your hand. All you need to do is collect "The Great Hoodoo". 4 cards of the same value but of different color, like 4-of-a-kind in poker. A player can get only one "Hoodoo" a turn but he who collects his 3 rd wins the game, he is definitely a Great Mage.