The goal of the player is to bring out his units, attack to destroy the enemies forces on the table and ultimately his strategic reserves - his deck. The game is turn based. During a players turn, he can draw a card from his deck, build a few units and perform one or two attacks. On the opponents turn it is important to defend. A player may also choose to play a tactic card changing the stats of fighting units, giving him extra resources on which to build or destroy the opponents resources and even use psychological warfare and cause such status effects like "Panic". 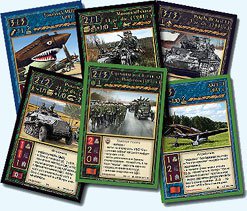 You can choose to fight as any one of the four belligerents: USSR , Germany , Japan or Alliance . The last one includes armies of Great Britain , USA and also France , Poland , Greece and China . Cards for the German axis have also been released: Italy , Hungary and Finland . There are many sets that cover certain periods of the war: "Defense of Moscow", "Stalingrad", "War in Africa", "War in Europe", "Winter War", "War in Japan" and etc. Cards in these sets represent units of that time and period so you can reenact certain war theaters. Separate cards represent historical names that took part in those battles, heroes who performed incredible feats and famous officers.

A feature of "The War" is that it is a collectable card game, meaning that each player builds his own deck by using both starter sets (a pre set deck) and special booster packs that contain a random selection of cards from one set or another.