QF is a specialized version of The Enigma of Leonardo designed for hardcore players, for those, that considered the core version too simple. Designed for those players, that enjoy strategic planning and quick thinking.

QF is played using the same cards as the core set - each card has two symbols on it, there are 12 different symbols altogether. Most of the cards are identical to the ones in the core set, while others have different symbol combinations on them. The set also includes a few special text cards (action cards).

The goal of the game is the same as in The Enigma of Leonardo, to collect Secret Keys, by making sequences of identical symbols but this time the game is played on one big field. The field itself is made during game play, the only restriction being its size - 5x5 cards. The first card is placed in the middle of the playing field, players then take turns at playing cards, increasing the field. In the end, the first card that was played might not even be in the middle anymore, it could be on the edge.

Players can not only play cards on empty spaces, they can play cards on top of each other and can even replace cards from their hands with the ones on the playing field. The only condition is that the cards being replaced must share a common symbol. This playing mechanic allows for more complex combos, by careful planning, one can gradually replace all the cards on the field with symbols that the player needs. 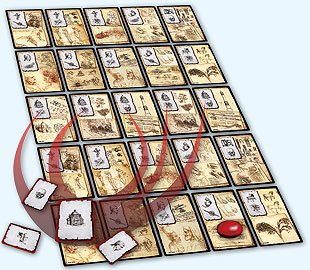 Just like in The Enigma of Leonardo, in QF players receive Secret Keys when they successfully make a row of cards with the same symbol. But now you can get symbols not only for 3 cards in a row, but for four and even five identical symbols. Qunitis fontis actually means - "the fifth symbol", when translated from Latin. Rows can be made horizontally, diagonally and vertically just like in the core game but now you can receive the same key more than once by first making a row of three symbols and then adding cards with the fourth and fifth symbol.

But it sounds much easier than it actually is. The game now uses a special counter-marker called "veto". After playing a card, the player may choose to move the marker on any card (even the one he just played) on the playing field. The next player cannot play any cards that share a symbol with the marked card. It's up to the players to decide should they move the marker each turn or keep it in one place blocking a certain symbol combination for the entire game.

Another new addition to QF are the action cards. There aren't much compared to another expansion of the game The Enigma of Leonardo - Novem - but they can alter the flow of the game. With these cards you can steal symbols from your opponents and prevent them from gaining new ones.

The player who successfully collects seven Keys is the winner. If the deck is used up and no one has collected seven Keys, the one to collect the most is the winner. In case of a tie a key gradation has been provided.