Underwood - An Intellectual Board Game Underwood reminds you of a simple card game based on its game mechanic but the actual point of it is to form words using letters, sort of like "Scrabble". Underwood has a much more "intellectual-educational tint" compared to normal card games and a much more dynamic gameplay than "Scrabble": words are easier to form, there are more unexpected events in the game and a lot less stress. 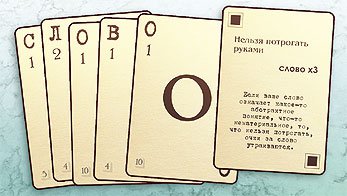 Each player during his turn adds one card to the "tape", this way the "tape" becomes longer. If a player needs a certain letter to form a word but doesn't have them he can take them from the "tape", he also takes the remaining letters following the one he took.

Prize cards can be played together with a word if the word fits the cards criteria (for example, is a piece of clothing, none of the letters repeat). The prize card increases the points for that word and can give a player some extra possibilities.

When a player "leaves" (has no cards left to play at the end of his turn or only has prize cards), the round ends and points are counted. Points for a players word are calculated based on the letter cost of that word (each letter is worth a certain amount of points) and prize card used. The cost of letters that remain on the player's hands is deducted from his point total. It is possible to get a negative result due to this.

Points earned during a round sum up with points gained on previous rounds. The game is played until one player earns the necessary amount of points to win (the number of points should be decided before starting the game). The first one to earn them is the winner.